Over the last hundred years we have seen huge improvement in society, particularly in regards to gender. Women can now vote, pursue careers that were once restricted to men and now have control over their own lives.

Yet there is still a long way to go.

From a young age, girls are often treated differently to boys.

I remember once at primary school being told off for being bossy because I was leading a group, whereas a boy was praised for showing his leadership skills. This stuck in my head and remains a clear example of how girls can be treated differently.

When I became a teenager, I often felt like I wasn’t a true girl, because I didn’t wear make-up and I didn’t want children. Instead, I wanted to have a career.

Society has a very specific idea of what a boy and what a girl should be like (although this is now changing), but I didn’t relate to either one of these 'ideals'. This made me feel alienated and I felt like I wasn’t good enough.

I can also recall comments about me and my body, both crushingly negative and also comments that are intentionally positive, but that come across as objectifying and derogatory.

A group of boys used to call me a ‘slut’ because they thought it was funny; they didn’t understand how damaging it was to hear.

Whether it’s blatant sexism, or as subtle as being spoken to in a patronising tone, it is frustrating, upsetting and difficult to deal with.

As I grew older, I began to understand that many girls have faced the same issues. Whether it’s blatant sexism, or as subtle as being spoken to in a patronising tone, it is frustrating, upsetting and difficult to deal with.

Recently there has been a large amount of research going into gender equality, such as analysing the gender pay gap. The more I read into it, the angrier I became, until I took it to God.

I remember it clearly. It was one evening a few years ago. I was sitting on my bedroom floor, bawling my eyes out, crying out to God "why?" Why would you make me a girl?

In that moment, years of pain came to surface. There was intense anger and hurt, followed by equally intense peace.

It's hard to explain but I felt that God was holding me close in that moment. I felt God's love deeper and stronger than ever before and I knew in that moment that he is bigger than any of it.

The hurt was still there, but it was no longer overwhelming.

Since then, instead of struggling against God, I've turned to him. This has made a world of difference.

I'm no longer held down by lies. Instead they've lost their power as I know the truth. Women are not less. Women are not restricted by their gender. And women deserve better.

The world we live in can be hard to deal with. Pressures to look and act in a certain way can be overwhelming. Derogatory comments or behaviour can be distressing. But the world is changing. It’s going to be okay. Whatever you do, don’t stay silent; speak up for what you believe.

If you have experienced anything like this, I want to tell you that you are not alone and you are loved, valuable and so incredibly special.

God has specifically created you to be a girl, on purpose and for a purpose. 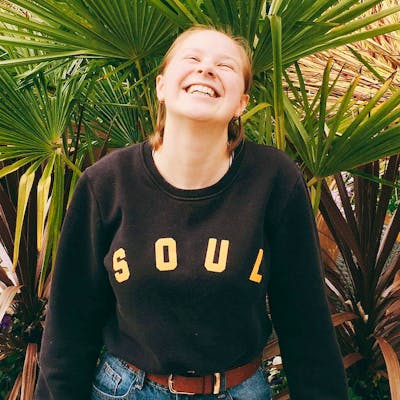 My heart is to see people bold in vulnerability, opening up to each other, and not afraid to ask for help.